Forest refers to an extensive area of land which is mostly covered by trees of different sizes and species. Or a forest is a dense growth of trees, plants and undergrowth covering a large area of land. Forests can be natural or man-made (planted)/ Artificial forest

i) Forests prevent soil erosion; Trees and grasses preventing movement of agents of erosion like water winds and moving ice.

ii) They maintain water sources like rivers, catchment areas, springs and lakes. This is due to the fact that forest support rain formation.

iv) Where there is a variety of trees, tourism can develop because of scenic beauty. Hence the country can gain foreign money.

vi) Forests contribute to the modification of the climate especially through rain formation and moisture conservation.

vii) Trees are also a source of fuel energy since they are used for firewood and charcoal making.

ix) They provide building material like poles and timber.

x) Some tree species are used for making medicine and also provide fruits as well as ornamental flowers.

xi) Forests contribute to soil development through rotting of leaves which lead to formation of humus. Humus is very important in plant growth.

There are two broad types of forests: Natural forests and planted (artificial) forests. Natural forests is the type of forest that develop naturally without intervention of man while planted forests are planted and cared for by man. Distribution of Forests by Type

Due to factors such as climate and tree species, natural forests can further be subdivided into the following broad categories.

They are found around the equator, between 23.5°N and 23.5°S. Trees in the tropical rainforests are tall and often take a very long time to mature. They consist of indigenous trees which are typically broad-leaved, and they contain thick under growths of shrubs and other vegetation.

These forests occur in the mid latitudes of both hemispheres. There are four distinct seasons in temperate deciduous forests and precipitation falls throughout the year, as rain in the spring, summer and fall and snow in the winter.

The forest floor in temperate forests supports mosses, ferns and wild flowers. Maple, oak and birch trees are some examples of the deciduous trees that dominate these forests. There are also small numbers of evergreen trees such as pines and fir. 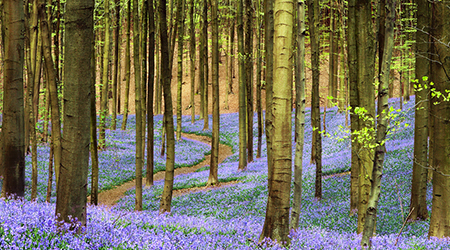 Coniferous forests are typically found in coastal areas with mild winters and heavy rainfall or in in-land mountainous areas with mild climates with temperature that fluctuates little throughout the year. Evergreen conifers dominate these forests.

Some deciduous trees such as maple, and mosses and ferns are common in coniferous forests. 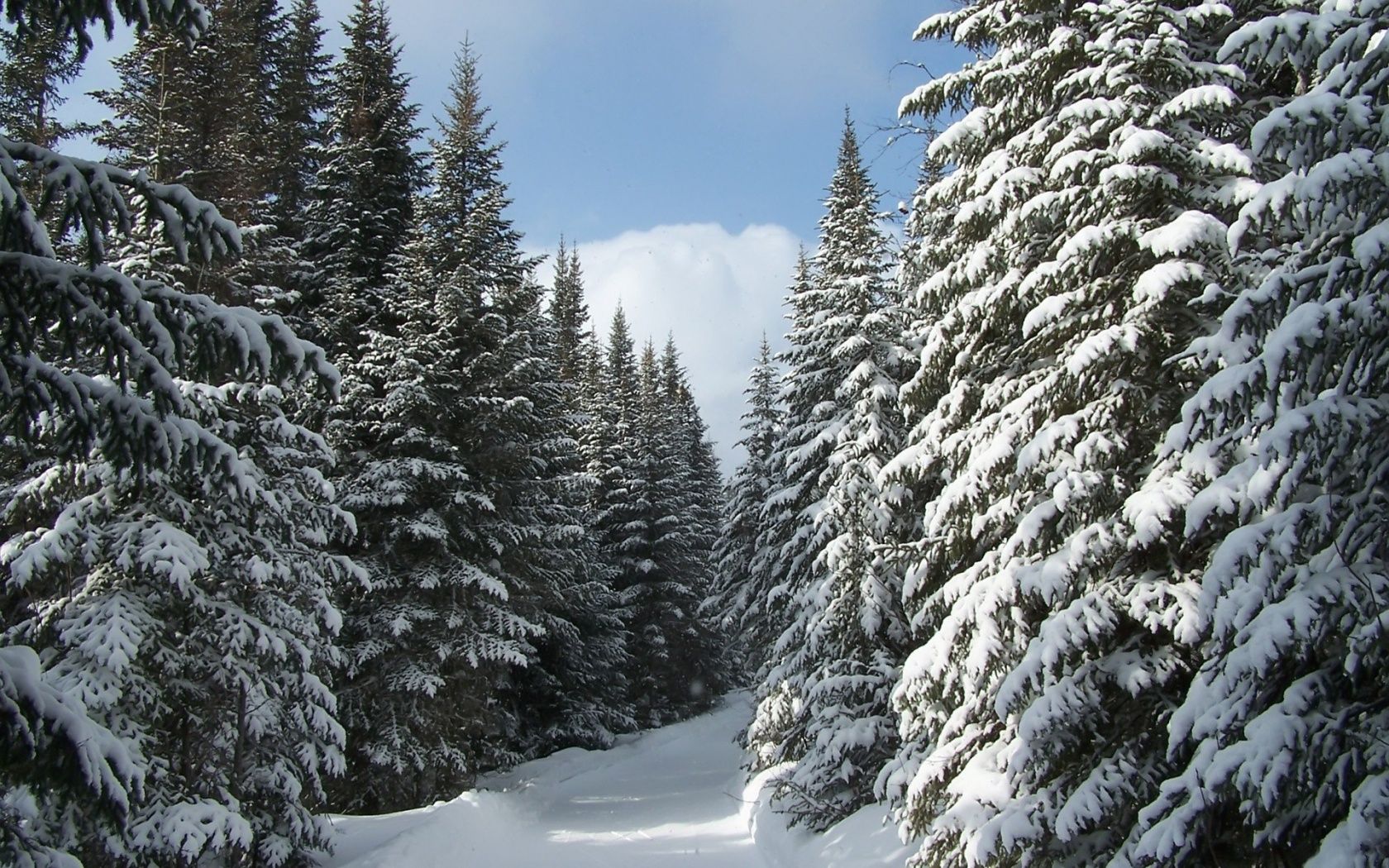 These are the northernmost forest type and are found between 50°N and 60°N. Boreal forests are characterized by long winters and short summers. Most precipitation is in the form of snow. Trees are mostly evergreen and include species such as spruce, fir and pine. 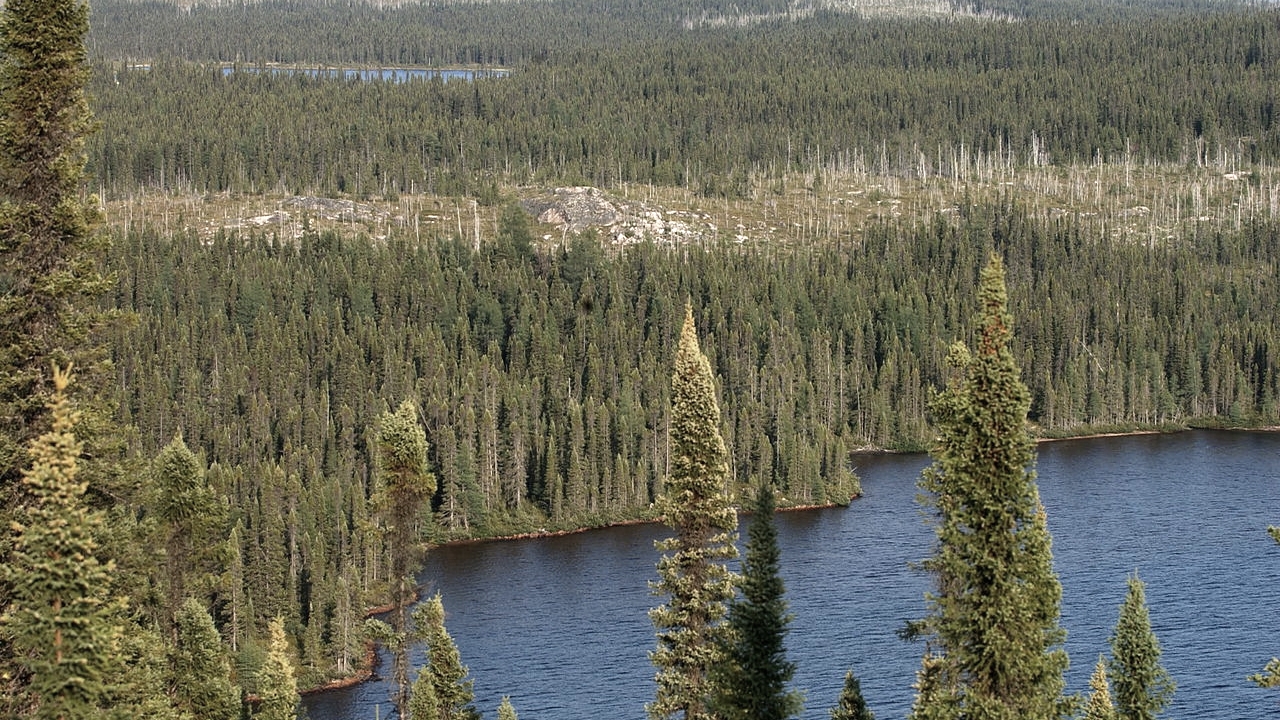 Factors for Distribution of Forests Forest distributions are affected by a number of factors which include the following:

Different types of soil offer various types of vegetation. For example, a damp and marshy soil will favour growth of types of trees such as mangroves, which are generally found on the coastal areas of the tropics or subtropics. On the other hand, sandy soils located in dry desert areas will support prickly bushes and cactus where the aim of the plant is to conserve water.

Water is an essential component of all living organisms. Trees need water for various physiological functions such as photosynthesis and cooling. Hence, it is essential for growth and development of any particular vegetation. Forests thrive well in areas that receive sufficient rainfall which is evenly distributed throughout the year.

Relief refers to variation in altitude in an area. Differences in altitude along the slope of a mountain bring about differences in the type of forests along a mountain slope. For example, you will always find dense forests on the foot of Mount Kilimanjaro. As you move up from the foot of the mountain, the vegetation type and density changes gradually.

At a height ranging between 1800 and 2800 m, there is the tropical rainforest, followed by the temperate forest at around 4000 m. Between 3000 and 3500 m, the forest is dominated by scanty vegetation, with patches of a bamboo forest.

In physical geography, aspect generally refers to the horizontal direction to which a mountain slope faces. The slope of a mountain facing the direction of prevailing winds (windward side) will always receive higher amounts of rainfall than the slope facing the opposite side (leeward side).

For this reason, dense forests will always grow on the windward side, due to abundant rainfall, while the leeward side will consist of scanty and poor vegetation.

So, the proper balance of plant health, water and air is necessary for maximum plant growth and development. Well drained soils support growth of a variety of big trees compared to water-logged and swampy lowland. However, few plants such as mangrove can thrive in shallow sea shores which are more or less permanently covered by water.

Human activities such as clearing the vegetation to get land for agriculture or settlement greatly affect the distribution of forests. Most of the natural forests of the world have been cleared by man. In some parts man has planted forests (artificial forests) on bare lands or in place of natural forests.

1) Timber For making furniture and constructional works or match making for pit pups and making of wood pulp for manufacturing new prints and crayon. In Brazil 30% of timber is used mainly for furniture, harbor piles and clock gates, boat building and tanning extractions, 70% is used for fuel 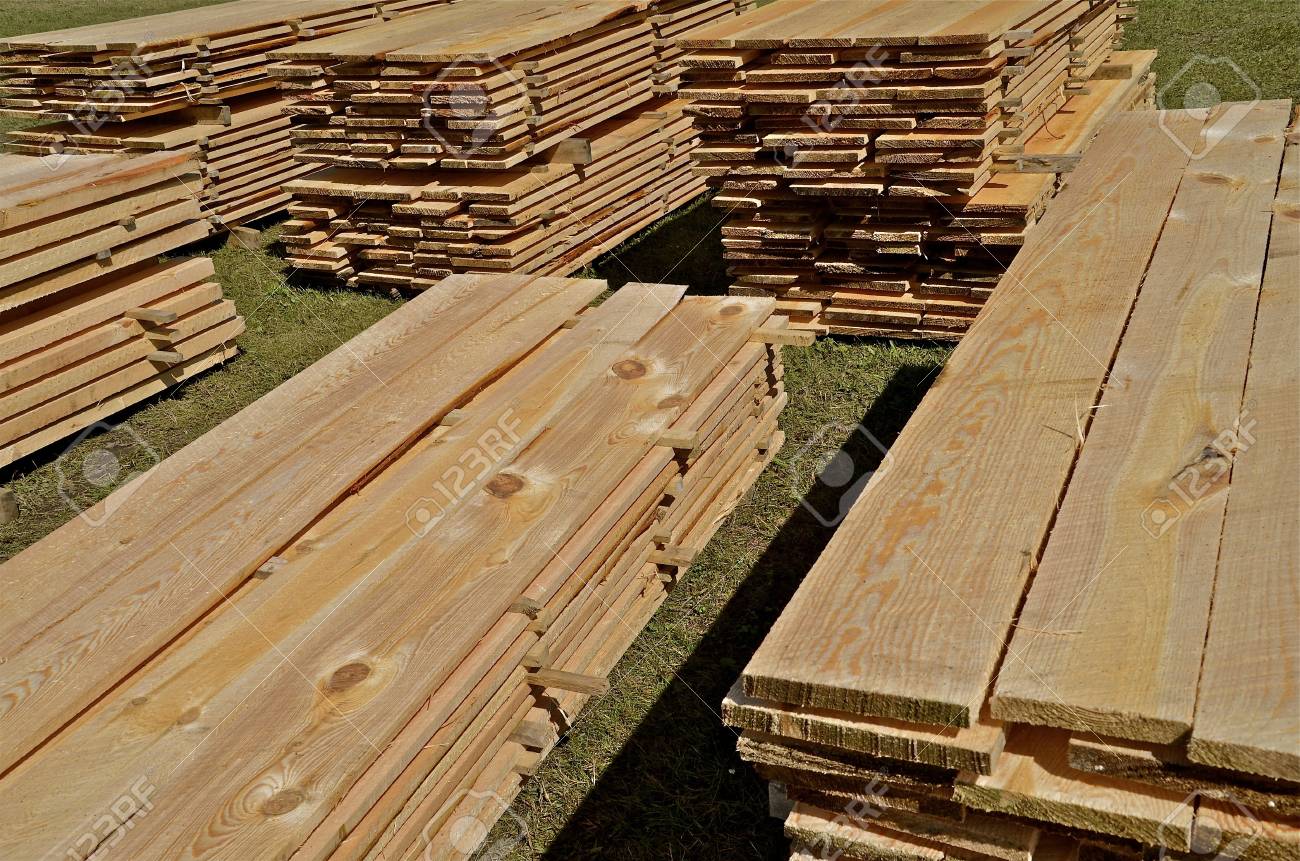 2) Raisins and gum Are obtained from tree balks

4) Oil from nuts Can be processed for vegetable oil

5) Fruits and flowers For human and animal consumptions

6) Medical plants Including the castor oil plant, salsa parilla, cinchona which are used for making genuine Ways of obtaining forest resource Forest resources can be obtained in controlled or uncontrolled method.

Controlled method; Are governed by government directions which discourage the use of fire and encourage sustainable development of forests for the benefits of the people and the creatures that inhabit such places. They include reforestation i.e planting trees to replace harvested forest resources.

Over exploitation of forest resources can cause the following environmental problems;

i) Increase in soil erosion; As the rain drops /falls harshly in the exposed soil and remove the fertile soil. 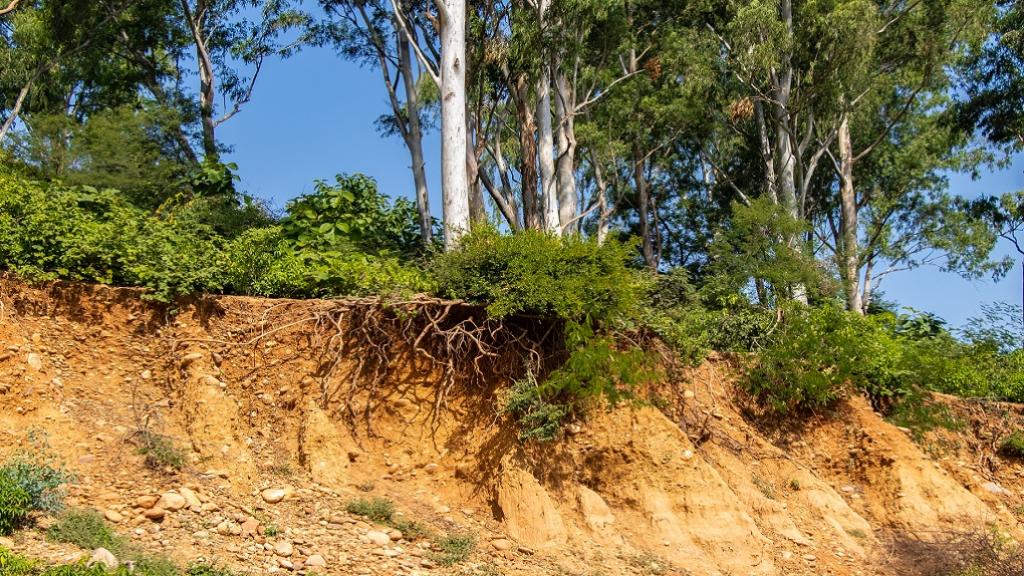 ii) Excessive evaporation; This causes drought (problems of water because streams and springs dry up).

iv) Accelerated desertification. This caused by prolonged drought of an area since the absence of forest affect rain formation.

v) Pollution of the atmosphere which can lead to greenhouse effect and global warming i.e. when forests are cleared by burning adding carbon dioxide in the atmosphere.

vi) Disappearance of some species of trees (loss of biodiversity).

vii) Unreliable rainfall due to the excessive evaporation 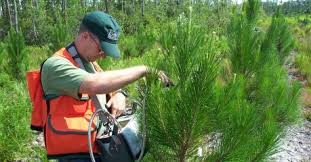 ii) Educating people on the importance of conserving the forest and persuading them to fully participate in all activities involving forest conservation. Also there should be clear policies giving directions on the proper use of the forest resources.

iii) There should be alternative energy resources used instead of depending on the trees. For example Solar energy, Geothermal power, bio-gas and HEP

iv) There should be careful land use planning in order to avoid destruction of trees. Population control should be encouraged in the countries so as to reduce pressure on the forest resources and the land in general.

v) Agricultural methods should be improved so as to encourage proper land use methods like shifting cultivation should be discouraged.

vi) Destocking (reducing the number of animals) should be encouraged among the pastoralists, because having too many animal leads to the destruction of vegetation. vii) New and fast growing trees should be introduced. Agro-forestry means the practice of inter cropping trees and crops in the same farm. Trees can be inter-cropped with crops like beans, bananas etc.

Advantages of inter cropping the trees with crops (Agro-forestry)

i) Trees prevent soil erosion while the crops like beans add nutrients to the soil.

ii) A farmer gets a variety of profits from the same farm. That is forest products and crop products.

iii) Family members get firewood from around homestead without traveling very far in search for firewood.

iv) Trees provide shades to other plants on farm land.

ii) Some trees are harmful to crops since they produce poisonous substances.

iii) Mechanization cannot be easily done because of the trees. Examples of areas with timber industry are:-

Sweden Canada And some parts of Japan where coniferous trees provide most of the forest resources. 60% of Canada is covered by forests and the major species are Oak, Chestnut, Spruce, and Pines

Factors which have led the development of the timber industry

2) Enough rainfall leads to the growth of the coniferous forests

i) Availability of many tree species.

ii) Availability of rivers like Ogowe facilitates the transportation of the timber products.

iii) Large foreign companies which were given concession to exploit the forests have capital.

HOW TO ANSWER AND SUMMARIZE A PASSAGE