he Nucleus of an Atom

The Detection of ‘8c’b1, ‘8cuc0u8804 and ‘8cu8805 Radiations
Explain the detection of ‘8c’b1, ‘8cuc0u8804 and ‘8cu8805 radiations
Geiger Counter, with Geiger-Mueller (GM) Tube or Probe
A
GM tube is a gas-filled device that, when a high voltage is applied,
creates an electrical pulse when radiation interacts with the wall or
gas in the tube. These pulses are converted to a reading on the
instrument meter.
If
the instrument has a speaker, the pulses also give an audible click.
Common readout units are roentgens per hour (R/ hr), milliroentgens per
hour (mR/hr), rem per hour (rem/hr), millirem per hour (mrem/hr), and
counts per minute (cpm).
GM
probes (e.g., “pancake” type) are most often used with handheld
radiation survey instruments for contamination measurements. However,
energy-compensated GM tubes may be employed for exposure measurements.
Further,
often the meters used with a GM probe will also accommodate other
radiation-detection probes. For example, a zinc sulfide (ZnS)
scintillator probe, which is sensitive to just alpha radiation, is often
used for field measurements where alpha-emitting radioactive materials
need to be measured. 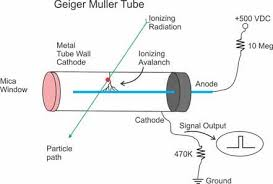 Spark counter
This
consists of a fine metal gauze mounted about a millimetre away from a
thin wire.A voltage is applied between the two so that sparking takes
place between them – this usually requires some 4000 – 5000 V. The
voltage is then reduced until sparking just stops.
If
an alpha-source is brought up close to the gauze it will ionise the
air, and sparks will occur between the gauze and wire. With beta and
gamma sources insufficient ions are usually produced for sparking to
take place.The spark counter can be used to measure the range of
alpha-particles. 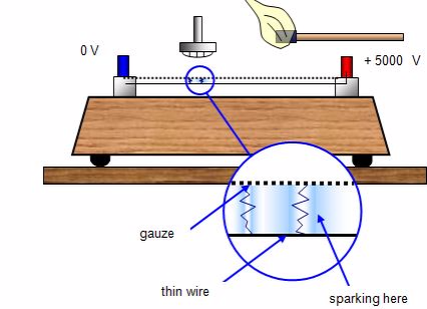 Cloud chamber
The cloud chamber, also known as the Wilson chamber, is a particle detector used for detecting ionising radiation.
Rare
picture shows in a single shot the 4 particles that we can detect in a
cloud chamber: proton, electron, muon (probably) and alpha. In its most
basic form, a cloud chamber is a sealed environment containing a
supersaturated vapor of water or alcohol.
When
a charged particle (for example, an alpha or beta particle) interacts
with the mixture, the fluid is ionized. The resulting ions act as
condensation nuclei, around which a mist will form (because the mixture
is on the point of condensation).
The
high energies of alpha and beta particles mean that a trail is left,
due to many ions being produced along the path of the charged particle.
These tracks have distinctive shapes (for example, an alpha particle’s
track is broad and shows more evidence of deflection by collisions,
while an electron’s is thinner and straight).
When
any uniform magnetic field is applied across the cloud chamber,
positively and negatively charged particles will curve in opposite
directions, according to the Lorentz force law with two particles of
opposite charge.

Where ln (2) is the natural logarithm of 2 (approximately 0.693).
By
plugging in and manipulating these relationships, we get all of the
following equivalent descriptions of exponential decay, in terms of the
half-life: 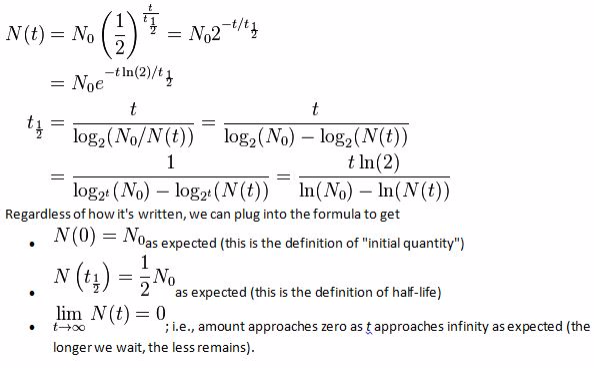